A Most Momentous Decision!

Well, yeah, it's a decision I should have made a long time ago, and which my programmer has been nagging me about pretty much from the moment he started working on the game (which is probably much longer ago than either of us care to remember!!).

It's about the graphics, and basically the inconsistency of style.  I thought we could get away with it but, the bigger the game got and the more we tested it, the more it felt like the inconsistencies were a problem.  So, we're redoing a lot of the backgrounds in a more cartoony style.

Fear not though, this shouldn't actually push back our schedule too much.  Just so you can see what I mean, here's a WIP of one of the redone screens... 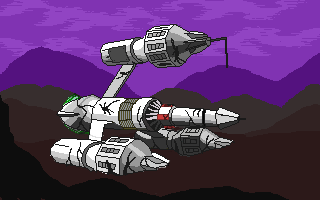 Captain Disaster is featured in the write-up of Adventure-X 2014 on AdventureGamers.com.

"the titular captain finds a simple package delivery job turning into a quest to save the galaxy. With the questionable aid of an inept computer in this quest, our hero will be party to a series of unlikely events, including inadvertently becoming a famous rock star for a time. The game has a family-friendly approach with a retro cartoon style." 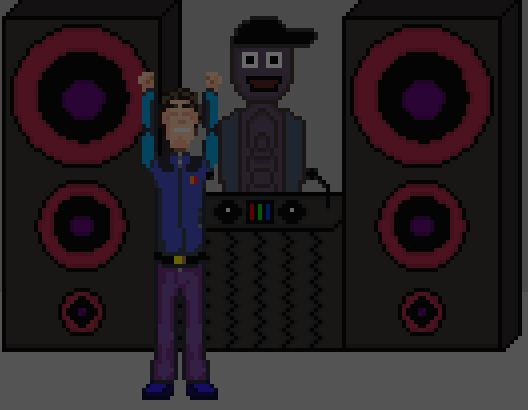 Well... I think it was a success.  Attendances for the demonstrations were almost universally low, I think only Technobablyon came close to having a really decent number (maybe WEG's mystery game too, I wasn't there for that).  But still, more people came to see Captain Disaster being demoed than either of my other games, and to me it was by far my best presentation.  I was really relaxed, had a good rapport with the audience, and they seemed to laugh at all the right places.  (Whether for the right reasons or not I couldn't tell you, but they seemed to be as concentrated a group of science fiction and adventure game nerds as I could possibly hope to have looking at this game! :-D)

Doing this presentation actually led up to my proudest moment of Adventure-X 2014 - Theo Waern, designer of The Journey Down, came and told me that he enjoyed the Captain Disaster presentation.  Considering I'm a huge fan of The Journey Down, that really meant a lot to me.  (The reaction to one of the cut scenes was also a top moment, but you'll have to buy the game to find out...)
on December 08, 2014 No comments:

Looking for a job in deep space... 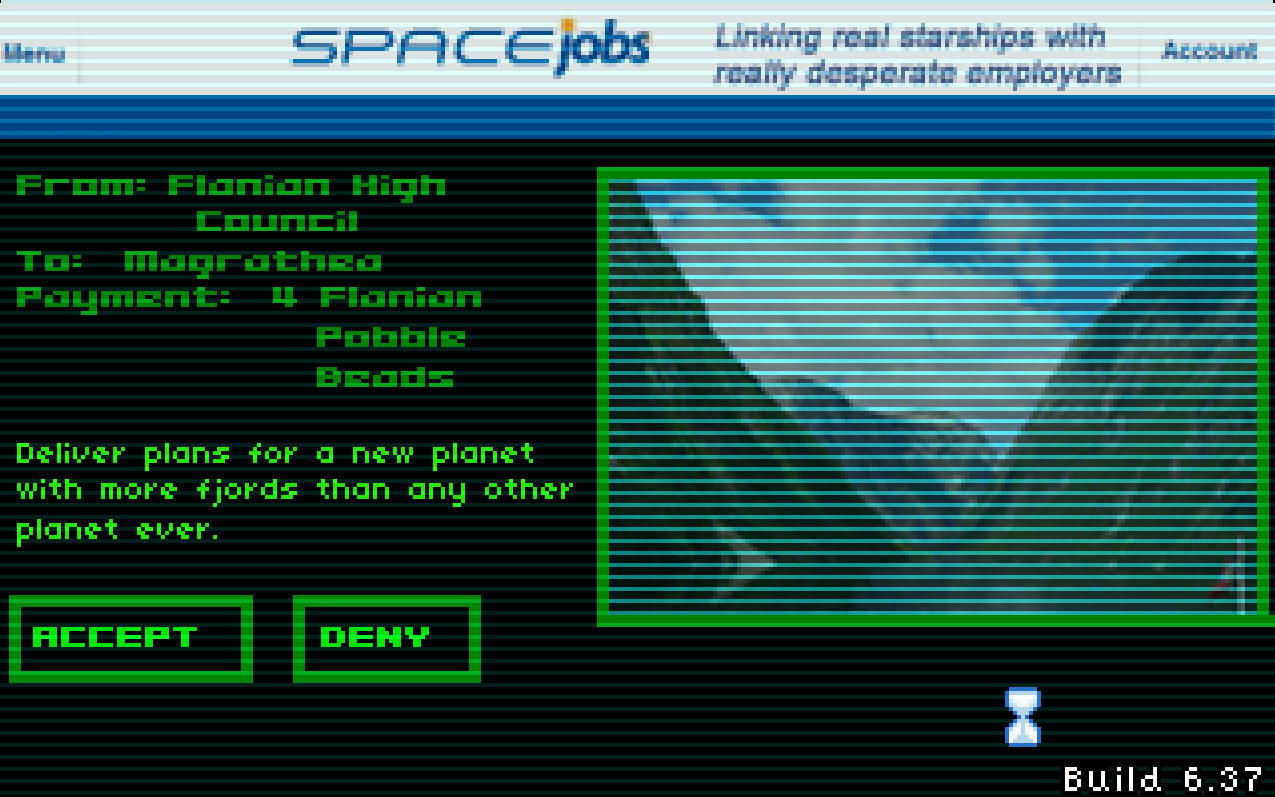 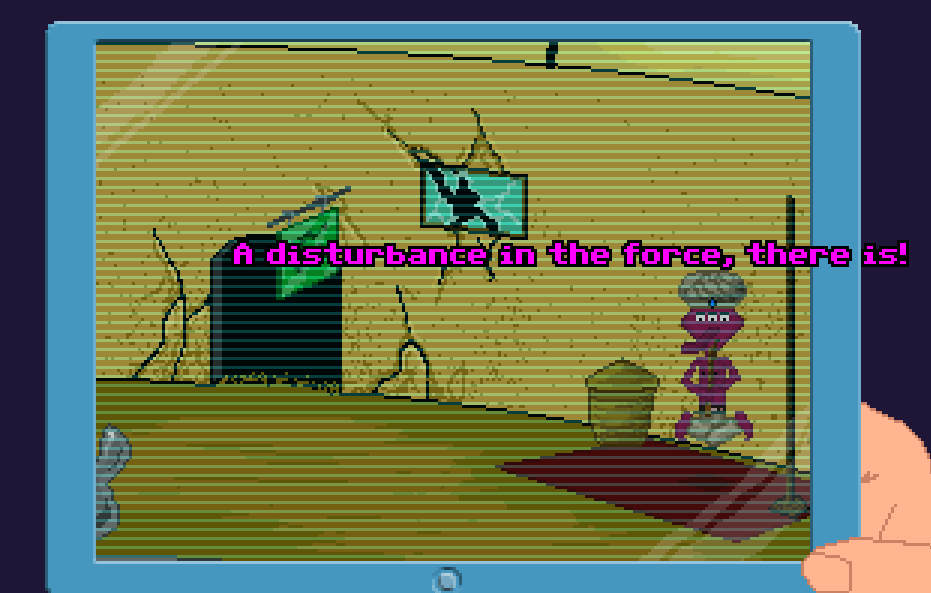 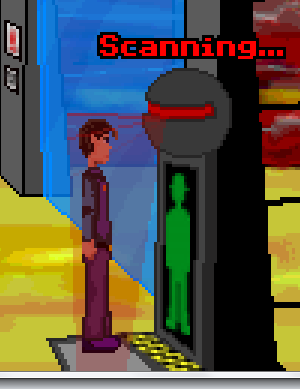 Yay!  We have the official report back from our Beta Test Team!

Now to deal with this 55-point report and try to iron out any remaining bugs / problems with Acts I&II... 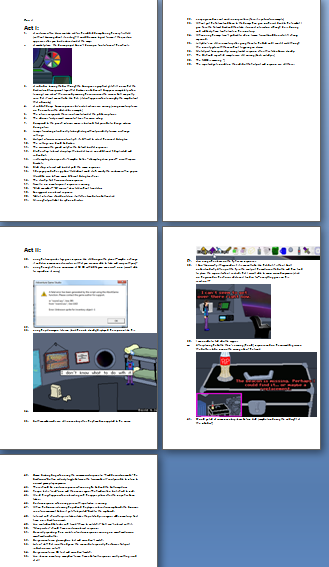 A warning to fellow gamedevs who voice act! 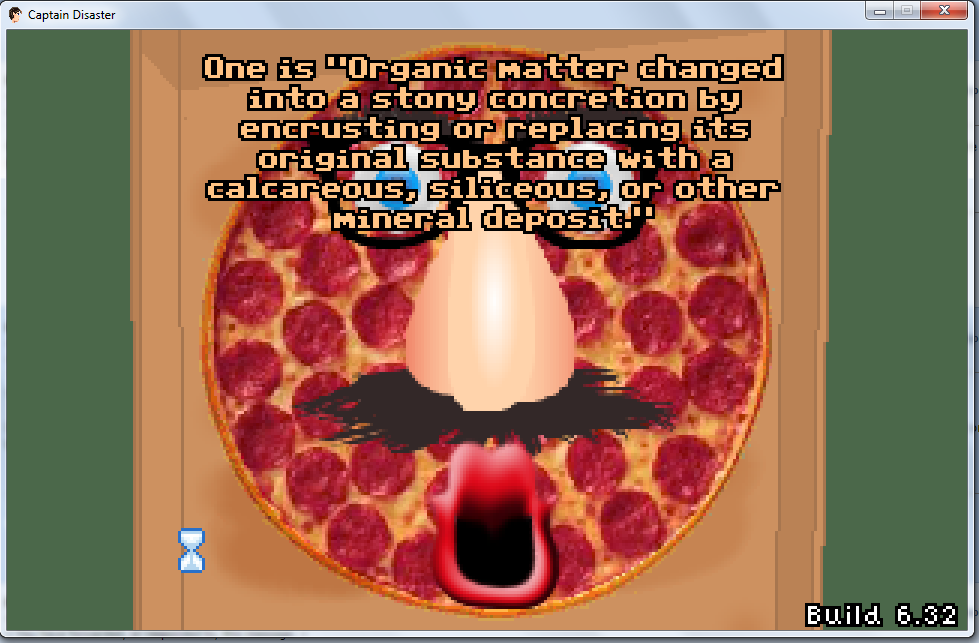 Test reports are starting to roll in, and the Act III backgrounds are slowly getting finished... work continues, hoping to have a lot to showcase at Adventure-X!

I'm pleased to announce that I will be showcasing Captain Disaster in Death Has a Million Stomping Boots at AdventureX this year - a change of venue this year, it will be held in the South Bank University.  Full details on the Official Website. 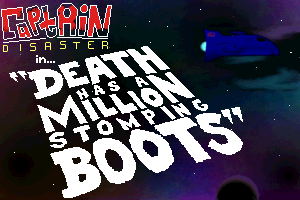 Time for another post... do you want the good news, or the bad news?

Hi folks, sorry for the long gap between updates again.

The good news is that we've made a lot of progress in making the game, Acts I and II are fully completable, work has begun on Act III and it's all going rather well.

The bad news is, for various reasons beyond our control we've got a little behind schedule, and as a result have decided not to try to a December 2014 release date as we were previously going to.  Barring a miracle I don't think we'd have the game finished by then and even if we did, I don't think we could be confident that it was thoroughly tested and bug-free.  So.,,... we're probably going to be looking at a Summer 2015 release date.

On the plus side, it looks like Adventure-X is happening again, probably on 6th and 7th December 2014, and I am definitely planning to showcase Captain Disaster in Death Has a Million Stomping Boots there - as well as my other game, Troll Song.  More news on that in the near future I hope.
on September 04, 2014 No comments:

Email ThisBlogThis!Share to TwitterShare to FacebookShare to Pinterest
Labels: update 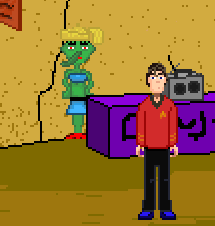 Act I is now with our beta test team (Arj0n, Cat and Tabatha from the AGS boards) - all I know for sure so far is that they've found one typo.  I'm sure that soon reports will flow in of weird and wonderful ways to break the games, impossible to foresee continuity errors, and the like.

Act II is, believe it or not, almost finished as well.  We've decided to take a different tack that will basically involving adding new puzzles to the existing demo section rather than introducing a whole new section with its own unique game mechanics etc.  While the idea was nice, this way we get to finish production of Act II quickly and ensure that people who've played the demo don't feel that they are playing exactly the same thing when they reach that part in the game.

Just waiting on Ben Chandler for the Act III graphics, and we'll start on the big finale.  (Well, that's probably a job for August / September, but it feels like we're really making good progress atm.)
on July 13, 2014 No comments:

Well, it's pretty exciting for me and potentially exciting for our test team - we're now officially on our very final Dev Test Build for Act I, before we throw the whole thing into a Beta Test Build, give it to our testers and sob uncontrollably as the break it in ways we never thought possible.

Act II is more than halfway done already, and we hope to have that ready for testing by the time we get the official beta test report back for Act I.  You see, it isn't all thrown together completely at random!

Lovely review of Captain Disaster in: The Dark Side of the Moon

"I really enjoyed this adventure. Loved the Pink Floyd references, good graphics, funny and interesting dialogue, and challenging puzzles. What I enjoyed most was the creative integration and brilliant uses for inventory items picked up along the way, of course you'll have to play the game yourself to find such a fun way to travel around the moon, and the cool things some of the other items can do in the game. The bonus achievements were clever and alot of fun. Thanks so much Team D for putting this one together. Definately look forward to your next game."

Email ThisBlogThis!Share to TwitterShare to FacebookShare to Pinterest
Labels: captain disaster, reviews, the dark side of the moon

I'm pleased to report that we have been making really good progress on finishing up Act I in the last week.  To be honest we could probably have got it finished by now if we're taken some short cuts, but we really want to make sure that the game is complete, enjoyable, and we're not skimping on extra little touches if we think they will genuinely add to the game.  On the other hand, we're having to be honest with one or two scenes that maybe didn't add much and cut them out.  It's all shaping up very nicely.

In the meantime, since it will be quite a while before Captain Disaster in Death Has a Million Stomping Boots will be available (we're hoping for a December 2014 release), why not try out our shorter, freeware game, Captain Disaster in: The Dark Side of the Moon?  If you like comedy sci-fi and particularly if you're a Pink Floyd fan, you should hopefully have fun playing it.   Disappointed that less then 500 people have played it so far, and that we have less than 5 votes on the AGS Games Page so there is no average vote yet - I mean, it's not an amazing game, but it should give adventure gamers an hour or two of fun at least.

In other news, the AGS Bake Sale 2 is here - 4 games for Pay-What-You-Want available until the end of May 2014.  I just reviewed "Blue Lobe, Inc.", one of the games in it for which I voiced 3 characters - doing the voicing was fun and the game is a blast.  (The sale is to raise money to help keep the AGS servers going.)
on May 16, 2014 No comments:

Email ThisBlogThis!Share to TwitterShare to FacebookShare to Pinterest
Labels: ags bake sale, progress report, the dark side of the moon

... we have been making real progress.  Sharpening up dialogues, improving graphics and animation, making sound effects, confirming that the puzzle logic works, looking at the game-flow and how to make it better, making compromises if it will help us get things done quicker without harming the game...

It's a constant process, as any dev will tell you, but unfortunately it means there aren't really lots of amazing, exciting things to tell you - just that we're getting ever closer to a completable Act I to send out to our testers.  I know that doesn't sound like much in terms of the overall game, but remember that Act II is already half done (the demo section), and while Act III is going to be quite big, we've learned a few ways to get it made quicker - unfortunately we (or, that is to say, I ) made a lot of rookie mistakes with the early planning and production of this game.  I won't make them again!
on May 09, 2014 No comments:

Email ThisBlogThis!Share to TwitterShare to FacebookShare to Pinterest
Labels: update

It's not that there's been no work done on the game for ages, but today we put out the first status build for quite some time, which features both new content and several GUI improvements, plus numerous bug fixes.  Here's a quite screenie to prove that things are progressing!  (Just in case you won't take my word for it...) 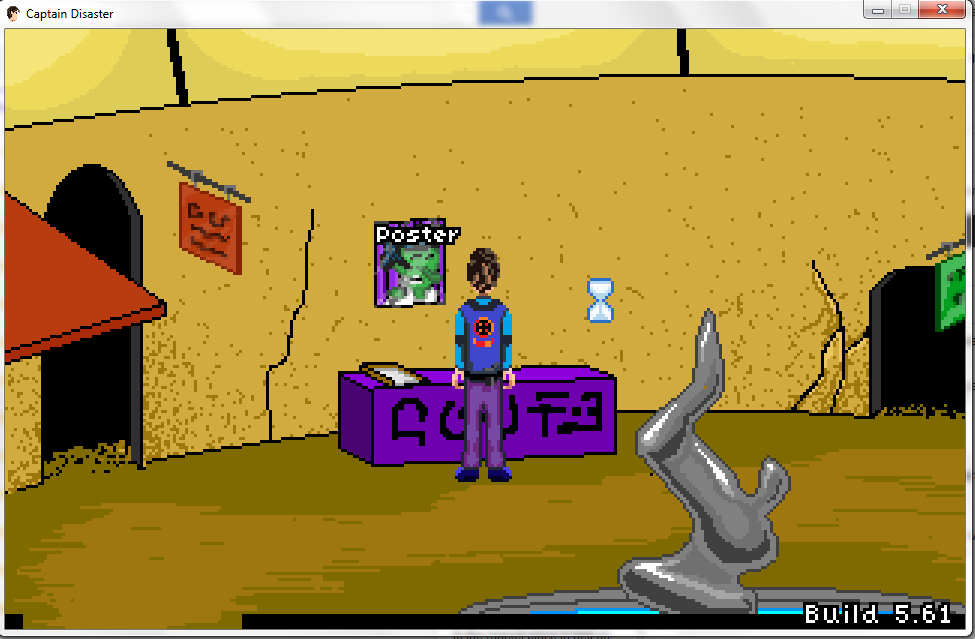