At the moment we're refining one of the cut scenes, adding voices, refining animations, putting a few more graphical elements in and starting to build the puzzles.  I have to say (again!) that I'm delighted with the progress we've made on the game so far, and the talented people that have come together to help make it.    We hope to be able to release our "proof of concept" demo really soon, which will show a very small section of the game in pretty much its completed state.

... originally I had been planning on releasing 11 episodes based on the short story episodes, but to be honest the stories don't lend themselves to it very well at all - too much humour and plot development relies on random chaos!  So we've decided to move onto a new idea - bigger games, with a completely developed plot, just featuring some elements from the stories if they fit okay.  The idea is now to do much bigger games than I'd originally planned, and although nothing's set in stone yet, I really like the idea of making this a commercial venture rather than freeware.  To do this we'll obviously need to make sure that the game is both long enough and good enough to warrant charging for it, but I think with the talented people already involved, that shouldn't be a problem...  More news on that when things start to develop and get confirmed.

In other news, I've decided to create the Captain Disaster Collection - Compact Edition Ebook, which I'll release soon - this will contain the 11 episodes and a short description of how the character and ideas have been used to create the computer game.  As the title suggests this will be a bit more compactly formatted, and also significantly cheaper than the current edition of Space Oddity.
on May 15, 2012 No comments:

These are my first rough takes on the HUD (Head Up Display), Microwave (every starship should have one!) and food replicator (doesn't work as well as the one on the Enterprise).  Taxler will turn them into much more visually appealing creations!!

Top marks to anyone who gets all three computer game references in the names of these items... 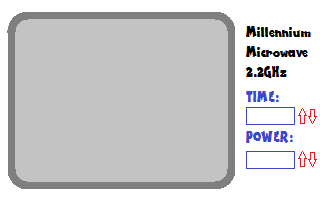 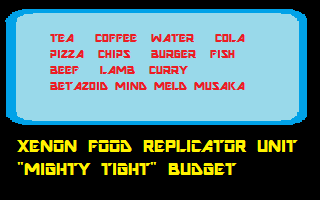 I have to say that I'm really happy not only with the speed at which this is progressing, but also the whole look of the game so far - it's perfect for the character and story style.  This is the only project I'm working on that is actually progressing more quickly than envisaged...

... things are starting to shape up pretty well so far - a few tweaks and we'll soon have a fully explorable ship in pre-alpha...

Many thanks to WHAM for his help with this (check out the development thread for his game "He Watches")!  Will possibly change of course but this should be the basic character design: 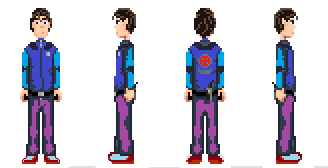 Before you ask yes, the colours really are supposed to be that gaudy!  The Captain is a Disaster after all...

Will have to make a decision on screen resolution - we had been intending to go for 320x200, but not so suto re the sprites would work so well with this.  When resized to our original character dimensions it looks less defined and I'm pretty sure will be more difficult animate - it does have a certain MI2 vibe, but even so... I'm not too sure about it.  Anyway I'll see what my partner in crime thinks and we'll come to a decision.

Anyway, the game is progressing quite nicely so far, though I'm still not too keen to pin a release date on Episode One at the moment.